I am an associate researcher in the Department of Human Oncology. My primary focus is on brachytherapy—the treatment of disease using radiation over short distances, primarily using radioactive materials. I am responsible for the treatment planning, safety and administration of brachytherapy procedures at the University of Wisconsin Hospital. My previous role in the department was oversight of the TomoTherapy program from 2008 to 2010. Since joining the department in 2007, I have been responsible for the education of radiation physics residents and radiation therapy interns with regard to brachytherapy. My research focus includes improvement in MR/CT imaging for brachytherapy and improved administration and treatment planning methods for brachytherapy. I currently serve on the Human Radiation Use Committee (HRUC).

Diplomate of The American Board of Radiology (DABR), Therapeutic Medical Physics (2011)

Brachytherapy treatment is only accurate if the imaging performed of the applicator with respect to the patient closely approximates the geometry of the actual treatment. This can be realized with improved imaging techniques, management of patient motion, better workflow to reduce total procedure time and robust treatment planning techniques.

For nearly two decades, balloon-based high dose-rate applicators for irradiation of breast lumpectomy cavities has been an effective treatment for women with early-stage breast cancer. Recently, our institution developed a novel double-balloon applicator that allows for a customizable distance of the radiation source from the breast tissue. However, this customizability may potentially result in dose distributions that could under-cover the target or cause unnecessarily high dose to normal tissue if the applicator is rotated from its intended position. The focus of this research is to assess the potential impact of rotation of the balloon during treatment and develop treatment planning methods that will minimize this discrepancy in the case of rotation without compromising target coverage. 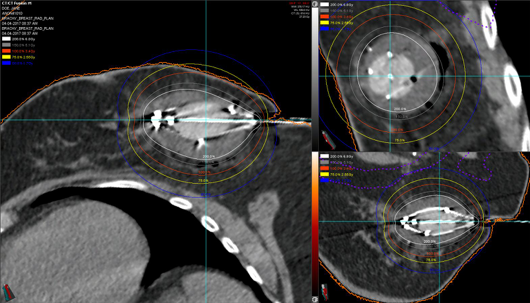